Weird day. Nothing happened, just how I felt. The usual. I’m emotionally drained right now after getting 60% through A Woman Under the Influence from 1974. Gena Rowlands’ performance is breaking my heart, just like in The Notebook.

Why did this brilliant film go under the radar and I’d never heard of it before?? Too slow? Too long? Too real? Those are the reasons I love watching films from the ’70s; they’re so gritty and raw. My favorite show is from that era, All in the Family. Because it’s HONEST! And absolutely hysterical. And it is still so unfortunately relevant.

Okay, so Gena Rowlands plays a sort of manic depressive with psychotic features and possibly BPD, but whatever the case, I hate how much inside her head I’m familiar with. It’s kind of grueling. And Frances (1982) with Jessica Lange! They’re both so awesome. And they’re both mental. 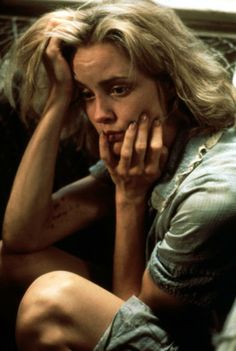 Don’t watch them if you don’t want to break your own heart.

I haven’t gotten around to reading/listening to An Unquiet Mind by Kay Jamison because they only have the abridged version and I don’t like anything abridged. I’m Not Crazy, Just Bipolar: A Memoir by Wendy K. Williamson was very good, though.

Uggggggg… let’s see if I can handle the rest of this film (A Woman Under the Influence). It’s definitely as incredible as Frances. Touched with Fire is a mostly romantic and exciting portrayal of mania… mostly. I have “Excelsior” from Silver Linings tattooed on my right forearm; I got it to inspire me to keep moving onward despite such a difficult illness.

We are such tragic but lovable creatures. I wouldn’t want to cause any children of mine any pain. It’s insidious and unpredictable. I know I am a gift to the world, just as any good and honest person is. I’ve outgrown and learned from a lot, the hard way; the only way my disorder knows how. I am a special kind of person in that I would require a special kind of person. Until then, at least I’m not negatively affecting anybody.

This is the time for friendship, front and center. Romance wasn’t going to save me. I just miss that high. I need love and understanding, and it doesn’t have to be sexual. Sometimes I consider that a plausible scenario would be to room with another manic depressive. Yes, I know it’s exhausting but it’s not confusing to me. I live it every day, too. I see you, too. I hear you out there. It’s okay that it hurts. It’s not okay okay, but there’s no shame in hurting.

2 thoughts on “A Woman Under the Influence”